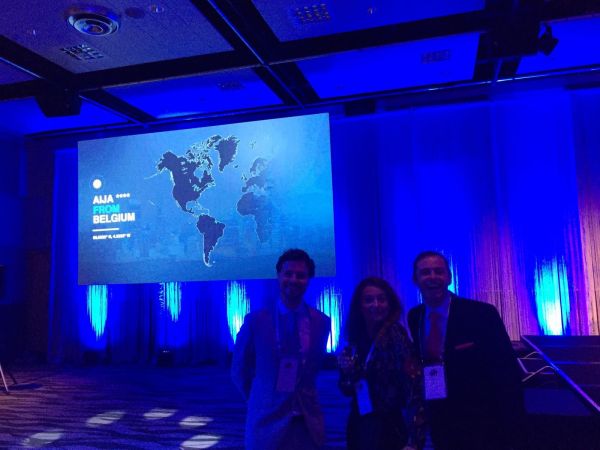 Two AIJA Bureau members recently visited the Inter-Pacific Bar Association (IPBA) as guests at their annual conference in Auckland. Part of AIJA’s ongoing work to deepen relationships with the Asia-Pacific region, and broaden networks for all AIJA members, Wiebe de Vries, First VP at AIJA and Justyna Szpara, Treasurer at AIJA, were happy to accept the invitation.

“We have a Memorandum of Understanding with IPBA”, explains de Vries. “This serves as a framework on how we deal with each other: representation at each other’s congresses and conferences, and mutual promotion of our events. Our cooperation has been improving significantly in the last years.”

By visiting the IPBA annual congress, it gives both organisations the chance to “meet and learn from each other’s agendas and events”, continues de Vries. “The promotion of our Tokyo congress was a key reason for going to Auckland and to speak to the IPBA board. In addition we met some of our Japanese AIJA Annual Congress OC members and other delegates that we could introduce our annual congress and other events.”

There was also the chance to meet with the Auckland young bar association, informed Szpara: “they are full of ideas on how to increase awareness of AIJA in New Zealand and Australia, so I won’t be surprised if we can have a seminar in this part of the world in the upcoming years. Webinars especially may be a useful tool to be in contact without travelling.”

“A considerable number of New Zealand lawyers move to London or Dubai for some time in the earlier stage of their career to work abroad, after which many of them return to New Zealand. It’s great to involve them in AIJA to give them a soft landing in the place where they go and to keep them involved when they return.”

The trip also provided a useful contrast and comparison to AIJA events: “Well, nothing beats AIJA! Our all inclusive approach to events, our more modest cost base, and our large young crowd are essentials that we must cherish. On the other hand, compared to other large international lawyers associations, we think IPBA is a more informal and pleasant organisation to go to.”

There was another key difference, joked the visiting bureau members: “At AIJA, the bar stays open much longer!”