Agata Adamczyk shares an insight into the ongoing demonstrations about women’s rights in Poland. For the past two weeks, Poles have protested in several cities against a constitutional tribunal decision that bans abortion in case of lethal defects of a fetus.

Agata Adamczyk is the AIJA Poland National Representative and VP of the International Business Law Commission.

On 22 October 2020, the Polish Constitutional Tribunal pronounced a judgement where it declared the unconstitutionality of the legal provision which allows for an abortion in case the prenatal testing indicates high probability of a severe and irreversible defect of the fetus or its incurable disease jeopardising its life.

As a result of this judgement, in case of lethal defects of a fetus, a woman will be obliged to continue the pregnancy until birth or until the natural death of the fetus.

This decision of the Tribunal exposes the fundamental human right of the unborn child – a right to life. It ignores, however, at the same time, the right of a woman to dignity, safety, and personal freedom.

Women have been treated as objects and have been denied their fundamental rights. Mothers, as well as the fathers of the babies and their families will be exposed to an unimaginable psychological trauma and physical suffering. This inhumane and humiliating treatment  is forbidden by the European Convention on Human Rights, in which Poland is a  signatory.

The judgement has also provoked strong objections due to the fact that it was rendered by the judges the impartiality and independence of whom have been called into serious and justified question. Their nomination to the tribunal in December 2015 was a consequence of the « annullment » of the nomination of judges previously elected by the former Parliament. This decision, commented as purely political, has been criticised not only in Poland but also on an international level (European Commission, European Parliament) as being contradictory to the rule of law and putting the democracy at danger. 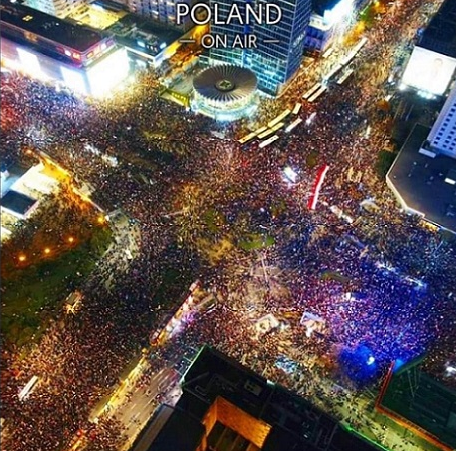 Polish legal regulations on abortion are one of the most restrictive in the EU. The current legislation has been in force for the last 23 years and has been called a compromise between the liberal part of the society and the conservative part, which is strongly linked to the catholic church.

In recent years, a number of amendments have been proposed to the law on abortion, aimed at restricting further the right to a legal abortion. In 2016, this legislative initiative provoked massive protests in Poland,  the so-called « black marches » during which thousands of women and men manifested in the streets with black umbrellas in their hands.

For this reason, members of a Parliament group brought a claim to the Constitutional Tribunal arguing that the incriminated legal provision is allegedly contrary to the Polish Constitution which, obviously, protects the fundamental right to life.

One of the members of Parliament who signed the petition to the Tribunal in this case is currently one of the judges who were sitting on the jury who pronounced the judgement on 22 October 2020. This situation provokes doubts based on the undisputable rule "nemo iudex in causa sua".

Due to the nature of the proceedings before the Constitutional Tribunal, this matter has not been subject to any public debate. What needs to be exposed is that the decision was pronounced in the time of the COVID-19 crisis when the fundamental right of gathering has been severely restricted. Many people are in quarantine due to the sanitary requirements and are not able to express their protest freely. Still, thousands of citizens have protested every day since Friday, 23 October 2020 in multiple cities, towns, and villages all across Poland. The protests continue.

The bar associations, the universities, and the NGOs active in the field of human rights have expressed their open protests against this judgement. The United Nations experts on human rights have also officially expressed their solidarity with the women in Poland and have called on the authorities to safeguard the rights of women and men who are protesting against this ruling.

Two judges who were sitting on the jury of the Tribunal brought their votum separatum, expressing their objection against this ruling and indicating in detail in which way it violates women’s rights and the rule of law. Among others, they have stipulated that this decision should not have been adopted for formal reasons and that the proceeding should have been closed without the decision as to the substance because the competence to regulate this very controversial and complex topic lies with the legislative power and not with the judicial power. It has been exposed that the Tribunal should not be used as a shortcut to change the law in case it cannot be modified by the Parliament due to the lack of the necessary majority.