Law 12.846/13, known as the Anticorruption Law, came into force recently, and will have repercussions on companies all over the country. 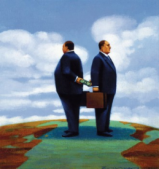 None of the rules in force up till now in Brazil have affected businesses in the same way as Law 12.846. The main differential of the new punitive measures in relation to the already existing laws in Brazil, which only managed to punish directly individual persons, is that, under the new law, legal entities can now be held liable, following the example of the U.S. and British legislation (Foreign Corrupt Practices Act and the UK Bribery Act respectively).

Note also that the liability of the company does not exclude the individual liability of its directors or managers or of any person who committed or participated in the illegal act, although the law warrants that “the directors or administrators shall only be held liable for illegal acts to the extent of their culpability”.

The punishments that companies may receive, if they act in an illegal manner, are very severe. The law stipulates fines in the administrative area which may attain 20% of the company’s gross sales for the financial year prior to the opening of the administrative procedure, and if it is not possible to apply  the criterion of annual sales, the fine will vary between R$ 6.000 and R$ 60 million, provided that it may not be less than the advantage gained from the act of corruption. Another measure to punish legal entities is to include the company in the National Registry of Companies Punished (CNEP), in which case it is prevented from participating in public bids or competitions.

The anticorruption law also affects those who use intermediaries in order to benefit in some way civil servants and also prohibits a number of acts that compromise the competitive nature of public bids or the equilibrium of administrative contracts.

Another novelty relates to cases of mergers or acquisitions, where the new owner may be held liable for an act of corruption committed by the company acquired, even if the act occurred prior to the purchase.

Although there are many uncertainties as to how the authorities will apply the new legislation, and the law itself generates doubts in many aspects, giving rise to differing interpretations, the fact is that its entry into force will have a serious impact on the way in which companies will henceforth conduct their business.

And, if the U.S. legislation (FCPA), which serves to a large extent as a model for the Brazilian law, is an indication of what is to come, companies have every reason to be concerned as to the manner in which they conduct their businesses, in view of the billion-dollar fines applied by the U.S. authorities, which are becoming more and more common, not to mention the depreciation that the company may suffer as a result of loss of reputation and discredit in the marketplace.

On the other hand, if there exist motives for concern, at least the law contains a clue as to the best means of protection against possible punishment, by stipulating that “the existence of internal mechanisms and procedures of integrity, auditing and incentives to denounce irregularities and the effective application of codes of ethics and conduct within the ambit of the legal entity will be taken into consideration on the imposition of the sanctions”.

As in the case of the FCPA and the UK Bribery Act, the Brazilian law provides for the possibility of internal control mechanisms for the purpose at least of attenuating the situation of companies in the event of punishment.

Hence the importance of developing effective and well-structured compliance programmes, which should contain, for example, a mapping and monitoring of risks, the preparation of internal rules and procedures, the creation of codes of conduct, the holding of training sessions, the creation of channels for submitting accusations, among other measures that allow the control and correction of possible illegal practices, all with a view to avoiding punishment for the company and its members, or at least limiting their liabilities.

These programmes, much more than a passing whim, are mechanisms that will prove to be more and more essential in the structure of companies, and particularly multinationals, which may also be subject to foreign laws on the same matter.

However, it is not sufficient to use the compliance programmes of the parent company. It is necessary to adapt them to the Brazilian reality and also to ensure that they will be strictly enforced, by means of continuous monitoring. Note that the obligation also extends to intermediaries, independent contractors, facilitating agents, suppliers and any other partners and/or collaborators who may interact in any way with public departments or civil servants.

In any case, there is no single formula. The fact is that the law is there, and, if its application comes anywhere near to what has been seen in the United States and Great Britain, with the constantly increasing number of enormous fines, companies have every reason to be concerned as to the adoption of immediate effective preventive measures to avoid problems under the new legislation.