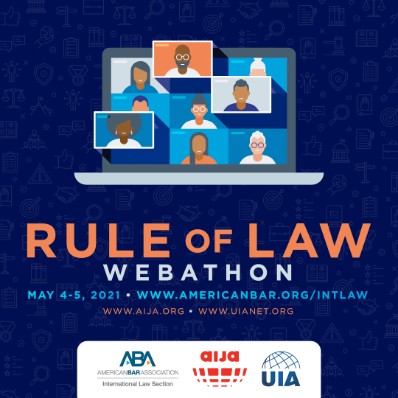 The Rule of Law is not merely the stock and trade of lawyers. It is our core value, the fulcrum of our profession and the polestar of our activity.  It is the social fabric that ensures human rights, democratic principles, economic opportunity, social development, and the fundamental freedoms we all recognise as self-evident. And with the world now facing unprecedented challenges, lawyers remain the first line of defence against efforts to undermine, circumscribe, or defeat the Rule of Law. To underscore the critical importance of that mission and the strong commitment shared by lawyers around the world, we have chosen to come together in an extraordinary way.

We are proud to present a continuous series of two-hour panel discussions that will move like the sun across the planet, spanning continents and time zones.

Have a look at the programme below. Find your topics, find your time zones, but most importantly, find your passion and join your fellow lawyers across the globe in defending the Rule of Law.

The Webathon is open and free to everyone.

Rule of Law Colloquium: Why Is the Rule of Law Relevant Today and What Can We Do to Protect it?
Organised by the Law Society of England and Wales

00:00 » 02:00
Add to Outlook / iCal calendar   Add to Google calendar
Attorney Discipline and the Independence of the Bar: Should Courts Play a Role?
Organised by State Bar of California

- Cheryl Axelby, Chair of Change the Record. Cheryl is a proud Narungga Woman who is passionate about improving the quality of life for her people. Cheryl has spent the last 40 years working within the Aboriginal community, Federal Govt and South Australian Government to improve the lives of First Nations peoples;
- John McKenzie AM, NSW Legal Services Commissioner. was principal solicitor at the 1987-91 Royal Commission into Aboriginal Deaths in Custody, received his AM for significant service to the law, the legal profession, and to social justice for the indigenous community. For over 40 years John held senior positions in Legal Aid NSW, was chief legal officer for the Aboriginal Legal Service (ALS) from 2006-2014, and has been NSW Legal Services Commissioner since 2015.
- Pr. Thalia Roberts, expertise in the areas of criminal law and procedure and Indigenous people and the law, with a particular specialization in Indigenous criminalization and Indigenous community justice mechanisms;
- Barry ‘BJ’ Duncan, founding member and Board member Darkinjung Local Aboriginal Land Council. Barry is a proud Gomeroi/Gamilaraay man from North West NSW.

04:00 » 06:00
Add to Outlook / iCal calendar   Add to Google calendar
Electoral Democracy and the Rule of Law
Organised by LAWASIA

Speakers:
- Paweł Filipek, Office of the Commissioner for Human Rights of the Republic of Poland and Associate Professor (Adiunkt), Institute of Law, Krakow University of Economics
- Mikolaj Pietrzak, Dean of the Warsaw Bar;
- Martin Pradel, Deputy Director General of the UIA Institute for the Rule of Law, Chairman of the Commission on The Exercise of Rights, CNB (National French Council).

14:00 » 16:00
Add to Outlook / iCal calendar   Add to Google calendar
Justice Amid Military Conflict: Does the Rule of Law Go Out the Window in Time of War?
Organised by Paris Bar and held in French